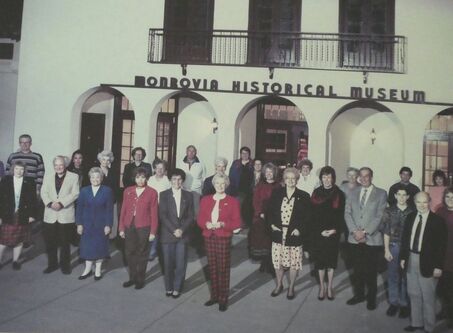 Founding Board Members - Steve Baker at front right. (October 1992)
Through it all, Steve held the board and museum together.  He later moved on to a project very dear to his heart as well as important to Monrovia.  He reactivated the board of the Monrovia Historical Society and became involved with the Legacy Project, which organized and preserved Steve’s collection of Monrovia memorabilia as well as the knowledge of early Monrovia people and events contained in that remarkable memory of his.

Personally, my husband and I owe a huge debt to Steve Baker.  We knew him since we moved here in 1986, and he was a great source of architectural and historical information on our own house, as well as for many other people who were attempting to restore their vintage houses.  He assisted people in landmarking their houses and was a strong proponent for the preservation of Monrovia history and vintage architecture.

Steve also assisted me in my own online project, earlymonroviastructures.org, by advising students from Cal Poly Pomona who designed the website, taking phone calls at any time of the day and late into the evening; discussing the fate of preservation in Monrovia over margaritas; and attempting to identify vintage photographs over wine after museum board meetings.

Thanks for the memories, Steve, and for your service to the City of Monrovia.

- Written by and shared with permission from Pam Barkas